Proverbs 18:16 says, “A man’s gift maketh room for him, and bringeth him before great men,” but it’s not talking about skills, talents, abilities, or even anointing. I used to think it was, as a matter of fact; I used that verse in that exact way until I began to study it in greater detail. In this article, I’ll be teaching what it really means and how that understanding can change your life.

In my two-teaching album The Power of Partnership, I taught about the many rewards you receive when partnering with a ministry that is reaching out with the nearly-too-good-to-be-true news. I used the example of King David who set a precedent that gave the people who guarded the spoils an equal share with those who actually did the fighting. We learned that Philippians 4:19, which says, “But my God shall supply all of your need according to his riches in glory by Christ Jesus,” was written to people who were partnering with Paul in the Gospel and gave to his ministry on a regular basis. Paul confirmed that in 1 Corinthians 16:2, where he wrote, “On the first day of the week let each one of you lay something aside” (New King James Version).

The partners Paul was talking about were systematic, deliberate givers. I’ve also taught that the reason God prospers you is so that you can establish His kingdom here on the earth, and if you seek to build that kingdom, then He will provide a supernatural divine flow that will meet all your needs. I can promise you that when you pray and ask God for direction in your giving and then respond to that, He will take care of your financial needs better accidentally than you’ve ever been able to do on purpose. These are all powerful truths, but I want to show you an aspect of partnership that I believe very few Christians understand.

What does the scripture mean that says our gifts will make room for us and bring us before great men?

The Hebrew word that was translated “gift” in Proverbs 18:16, 19:6, and 21:14 literally means “present.” Those scriptures leave no doubt that they’re not talking about an anointing or having favour but about a present that one person gives to another. Proverbs 19:6 makes it clear that “every man is a friend to him that giveth gifts,” and in 21:14 we read that “a gift in secret pacifieth anger: and a reward in the bosom strong wrath.” The New International Version translates Proverbs 18:16 this way, “A gift opens the way for the giver and ushers him into the presence of the great.” I believe these scriptures describe a very important aspect of what happens when you enter into partnership with a ministry.

Let’s look at an example of this in 1 Kings, chapter 10, which talks about Solomon, the wisest man on the face of the earth. Solomon asked God for a very unselfish thing, wisdom, so that he could be a good king. Not only did God give him what he asked for, but He also gave him what he didn’t ask for and made him exceedingly rich. In fact, the Bible says that he was so rich that everything he had was made of gold, and they didn’t even use silver; it was just thrown in the streets (1 Kin. 10:21). That’s pretty rich.

The fame of Solomon spread throughout the land, and in 1 Kings, chapter 10:1-3, we read,

“And when the queen of Sheba heard of the fame of Solomon concerning the name of the LORD, she came to prove him with hard questions. And she came to Jerusalem with a very great train, with camels that bare spices, and very much gold, and precious stones: and when she was come to Solomon, she communed with him of all that was in her heart. And Solomon told her all her questions: there was not any thing hid from the king, which he told her not.”

The Queen of Sheba was so overwhelmed by Solomon’s kingdom and wisdom that it actually took her breath away (1 Kin. 10:4-5).

In 1 Kings 10:24 we also read that all the kings of the earth sought Solomon for his wisdom and for his blessing. Think about that; Solomon was the most famous man in the world in his day. He was ruler of the most powerful and prosperous kingdom in the world in his day, and all the people of the earth sought Solomon for his attention so they could ask his wisdom, get his opinion, and receive his favour. So with all these people competing for his time, why did he move the Queen of Sheba to the front of the line and spend so much time answering all her questions? I believe it was her gift that made room for her, just like Proverbs 18:16 says, and it brought her before a great man.

We read that she was well prepared and came with many gifts. She gave the king 120 talents of gold (that’s about 145,000 ounces and at today’s price would be about $44,000,000 worth of gold). That doesn’t include the great stores of spice, an abundance of which had never been seen before, and precious stones. It wasn’t her skill, talent, or ability but her huge gift that made room for her and put her at the front of the line.

So what did the Queen of Sheba get out of this? Everything she wanted and more. 1 Kings 10:13 says,

“And king Solomon gave unto the queen of Sheba all her desire, whatsoever she asked, beside that which Solomon gave her of his royal bounty.”

There isn’t space in this article to prove the math, but the gift that the queen gave to Solomon was only equal to one-tenth of one year of the king’s annual income. When the scripture says the king gave her of his royal bounty, don’t you think his gift was greater than hers? When the queen left for home, she left with greater riches, more wisdom, and the favour of the greatest king on earth. Her gift opened the door to great blessings.

Does what the Queen of Sheba did seem selfish to you? Are you thinking that all those riches should have been given to the poor who would’ve really needed the help instead of the richest man on earth? I don’t believe it would be out of reason to think that some king or ruler or tribe came to her and begged for her help as she travelled. It probably took hundreds of camels to carry these gifts, so her journey wasn’t any secret. You know, it could have been a real guilt trip as she passed by all the needy people, but the Queen understood a very important principle that applies to the support of a ministry today.

When you give to a ministry, it’s not just what they need, it’s what you need too!

King Solomon didn’t need the queen’s riches, but she needed his wisdom and blessing, and her gift opened the door to the very things she needed. She probably left with more riches than she brought, and just think of how much more of a blessing she may have been to the poor on her return trip. This is a great example of how things work in the kingdom of God.

When you give to a ministry, you not only bless the people that are being touched by that ministry, but you start a supernatural flow of your finances, and you partake of the anointing and the blessing that’s on that minister’s life. It’s not bad to want the anointing that is on my life or that of another minister. The Bible says that we are to desire spiritual gifts. I really believe that the things that are operating in my life have come in part, not totally because I have supported great men and women of God. I gave on purpose, saying, “God, I want to be a part of that. I’m going to sow part of my life into this person and into that ministry and, by doing so, open a door that allows the blessing that’s on them to flow toward me.” It doesn’t just happen automatically; you have to have faith. But I believe that you can start seeing these things happen in your life just as I have seen in mine, if you will mix faith with your gifts.

Some very good friends of Jamie and I, whom we’ve known since about 1980, have a great testimony that will illustrate what I’m writing about. Charlie and Jill LeBlanc are one of the most anointed couples in music I’ve ever heard. Even though they have always had a powerful anointing, they struggled financially earlier in their ministry. Because of that, they developed a real heart for other quality ministries in the same position. They were taking all their tithes and offerings and giving them to smaller ministries where they felt their gift could really make a difference.

Their gifts were certainly making a difference in the lives of these ministers and the people those ministers were reaching. They were also experiencing a supernatural flow of God’s divine prosperity coming toward them, but they were still missing one very important element – they needed an impartation of anointing and blessing that those they were giving to were not able to give. The Queen of Sheba needed something her peers weren’t able to give either, so she went to the one who could, King Solomon. It wasn’t just a selfish desire; it was important so she could better fulfil her role as queen.

The Lord began to convict Charlie and Jill of this, telling them that they needed to start giving to ministries that fed them and had an anointing they needed. It was time to start partaking of the blessing and anointing that was on the lives of other ministers. In response, they began giving to people like Kenneth Copeland, Kenneth Hagin, Joyce Meyer, and me, all ministers who were imparting anointing and blessing to their lives.

Within about six months they received a call from Dave and Joyce Meyer, who asked them to dinner. During dinner, Joyce asked them to lead praise and worship in their Word seminars she conducts across America and around the world. What a blessing! They now minister on a regular basis to thousands, and their anointing has increased proportionally. It was no accident that this door was opened to them after they started giving, expecting to receive increased blessing and anointing. This isn’t to say that God doesn’t lead us to do benevolence giving, expecting nothing in return, because he does. Just like the Queen of Sheba, Charlie and Jill could have been sidetracked by the needs of all who were struggling, but they knew that what they would receive in increased anointing and blessing would make it possible to benefit those around them in a much greater way.

It’s important to understand the power that is available in partnership and then put that power to work for you. I pray that the eyes of your understanding are enlightened and that the Holy Spirit has borne witness with this teaching in your heart, and I release the blessing and anointing on my life to you, my partners. I can’t say all I would like to about partnership in this short article, but you can hear the complete message by ordering my two-tape or CD series on The Power of Partnership. 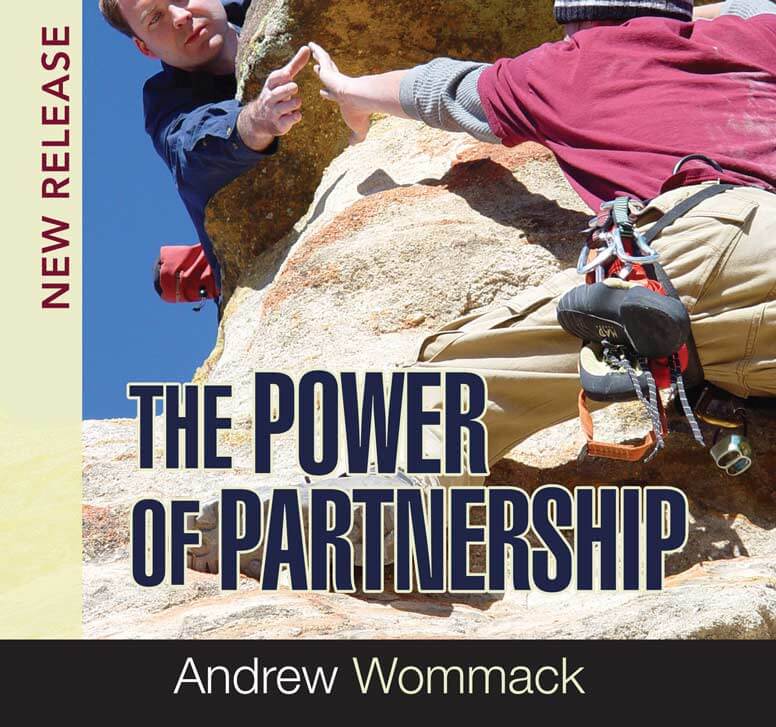 There are spiritual dynamics involved in partnering with the Gospel. True partnership will change your life once you understand its biblical purpose and God’s heart toward it.