Do you ever feel like you and God have drifted apart and that the love and joy you once experienced with Him has faded? If you do, you’re not alone. Most Christians feel like the experiences they have with God diminish over time and that they need another touch. But that is not what the Bible teaches.

The Bible says God will never leave us nor forsake us (Heb. 13:5). If that is true – and it is – who moved? As born-again believers, we are all capable of living in the fullness of God every day of our lives. God is continually pouring out His love, joy, peace, revelation knowledge, and every other blessing. But we can get to a point where we’re not receiving and “feel” like He has drifted away.

“When they knew God, they glorified him not as God, neither were thankful; but became vain in their imaginations, and their foolish heart was darkened.”

This scripture contains four separate elements, or keys, that can lead us into and keep us operating in the fullness of God. Expressed positively, they are glorify God, be thankful, recognize the power of imagination, and have a good heart. We have the power to control each of these in our lives.

In many places throughout the Bible, the word magnify is the same word translated glorify. Therefore, magnify and glorify can be used interchangeably. And magnify means “to make bigger.”

Did you know that you can make God bigger? Technically speaking, God is who He is, regardless of what you think, but in terms of your perception, He can be big or small. You have the power to make Him one or the other in your life.

Most of us have become masters at enlarging the problem and minimizing God and His Word. I remember a lady who thought she was pregnant but found out she had cancer instead. The doctors said she needed a hysterectomy immediately. They said she only had a 50 percent chance of living, and she wouldn’t live more than two weeks without surgery.

She came to me, crying, “Andrew, have you heard what they said?” Now, I don’t always respond this way, but I believe God led me to say what I did. I started laughing and declared, “Cancer’s no problem with God. The lights in heaven won’t dim from the power drain if the Lord heals you! It’s not any harder to be healed of cancer than it is to be healed of a cold.”

I started magnifying and glorifying God. I made the Lord bigger and the cancer smaller. The only thing that made the cancer insurmountable was the value she was placing on what the doctors said. They even called her a fool for refusing treatment and made her sign paperwork to absolve them of liability “when” she died. But she decided to stand her ground and believe God. It’s now been almost twenty years since she refused that operation – and she has a whole slew of children.

What do you value? What’s big to you? You can magnify the Lord and make Him and His Word bigger than any problem. Do it by glorifying, praising, and thanking Him. Find someone in the Word who overcame a situation similar to yours. Meditate on the Word, and make it more real to you than the problem. You need to get to a place where God’s Word is true and where He is greater than any situation.

“All things are possible to him that believeth” (Mark 9:23).

Paul listed un-thankfulness as one of the signs of the end times and put it in the same verse as covetousness, pride, blasphemy, and unholiness (2 Tim. 3:1-2). Not many would argue that we live in a society full of unthankful people, even in spite of the fact that we have more prosperity and opportunity than any people who have ever lived.

The second key to staying full of God is a thankful heart. Glorifying, magnifying, and thanking Him are all interrelated, but to glorify God, you must be thankful. As you are thanking Him, you’re reminding yourself of what He has said and done, which magnifies Him.

Being thankful involves both humility and memory. Humility is the understanding that you didn’t accomplish these things on your own. Then, humbly remembering the good things He has done for you always brings thankfulness. So, it’s important to look back and rehearse your victories and remember whose power brought them to pass.

“Enter into his gates with thanksgiving, and into his courts with praise: be thankful unto him, and bless his name. For the LORD is good; his mercy is everlasting; and his truth endureth to all generations” (Ps. 100:4-5).

Every time you are tempted to gripe and complain about a problem, don’t. Instead, enter into God’s presence and spend ten minutes thanking Him for His goodness. If you will, you’ll find that the natural desire to complain will cease, and the problem will shrink as you begin to see it in the proper perspective.

Imagination is much more important than most people realize. The Hebrew word that was translated “imagination” in the Old Testament literally means “conception.” Imagination is how new ideas are conceived. Without it, people become spiritually and creatively sterile.

A few years ago, I took a trip to Israel. I remember stopping in the valley of Elah. I got out of the bus and walked down to that little stream. I picked up five smooth stones just the way David once did. I began to imagine what it must have been like for David when he faced Goliath. The story came alive.

When the Bible says you’re healed, you’ve got to meditate on that truth until you see yourself healed. Most people allow their imaginations to become vain, and they agree with the image the doctors have painted rather than with the Word of God. They’re told what is going to happen, and they imagine it as truth.

When we fail to be thankful and glorify God, our imaginations automatically become vain. That doesn’t mean they aren’t working; it just means they begin to work against us. Those of us with vain imaginations are pessimists, imagining failure instead of success. We need to use our imaginations to agree with God’s Word and see ourselves the way God sees us: happy, healthy, and prosperous.

The Scripture makes it very clear that the attitude of your heart is far more important than your actions.

The Lord is more concerned about your heart than He is your actions.

“For from within, out of the heart of men, proceed evil thoughts, adulteries, fornications, murders, Thefts, covetousness, wickedness, deceit, lasciviousness, an evil eye, blasphemy, pride, foolishness: All these evil things come from within, and defile the man” (Mark 7:21-23).

Our hearts control what we say, and they also control what we do. All of the above are products of our hearts. The opposite of those can be true also. Love, joy, peace, patience, and the rest of the fruit of the Spirit are also products of what our hearts believe. The reason the heart responds in a negative way is because we allow it to be dominated by external, or physical, things instead of by the Word of God.

So, what do most people do when they realize their actions are being controlled by their hearts and are causing problems for themselves and others? They resort to behavior modification. They try to change their actions without changing their hearts, and that never works long-term. If people want their behavior to change, they must change their hearts. They must make sure that the Word of God is the dominant influence.

If you will put these four keys into practice in your life, you will never be the same. It will change the way you think about everyone and everything around you. It will give you a God perspective. 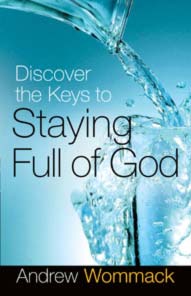 Discover the Keys to Staying Full of God

Many Christians’ experiences are that they are leaky vessels. Whatever they receive from God soon leaks out, and they have to be filled or healed again. That is not the way the Lord intends the Christian life to be