Sharper Than A Two-Edged Sword

The doctors sent her home to die, BUT GOD! Many of you may remember the testimony of Hannah Terradez. She is the little girl who was healed in Walsall, England, in 2006. She was three years old at the time but only the size of a nine-month-old baby. She had a problem that kept her from eating solid food of any kind. It was actually poisoning her body. A tube was then inserted into her stomach, but that failed as well. (Watch the video of her miraculous story at www.awmi.net/extra/healing.)

But God had a plan. What seemed almost insignificant at the time turned out to be the beginning of a miracle. Hannah’s parents had rented a car to take her to the hospital. The car was only equipped with a cassette player, so when they stopped by Hannah’s grandmother’s house to drop off the other kids, they asked if she had any teaching cassettes they could listen to. She found one of my cassette tapes in the back of a drawer, where it had been for fifteen years. Hannah’s grandfather hadn’t listened to it, because he couldn’t handle my Texan accent.

Ashley and Carlie Terradez, desperate to learn something that would help their daughter, listened on the way to the hospital, and it changed their lives. The Lord lit a fire on the inside of them that led to the complete healing of their daughter and a totally different direction for their lives. After Hannah’s healing, they enrolled at Charis Bible College (CBC) in England. They graduated, moved to America, and now help run the third-year CBC program in Colorado Springs. Praise the Lord!

I’ve talked to Ashley about this on a number of occasions, and he said the teaching on that cassette was exactly what he needed. Since then, he has listened to many of my messages, but he said that first tape was different than any other. It was like I took everything the Lord had shown me and put it on that one tape. I didn’t go into great depth on any one teaching but just gave an overview of dozens of life-changing truths.

Ashley and Carlie were in a crisis situation. They didn’t have time to study everything in depth the way they have since. But that summary of major points overwhelmed their unbelief and gave them the hope they needed in order to see Hannah healed. This was like getting a drink from a fire hydrant. It blew away their fears and caused hope to come alive.

The reason I shared the background to Hannah’s healing is because I have just released a new book that can do for you – and thousands of other people – what that tape did for Ashley and Carlie. It’s called Sharper Than a Two-Edged Sword, a compilation, or summary, of sixteen of my books. Each one of the sixteen chapters is like the CliffsNotes version of an entire book.

This book came about when my U.K. staff put out little trifold tracts that gave brief teachings on salvation; baptism of the Holy Spirit; spirit, soul, and body; and other topics that I often teach. Then they combined these teachings into one book.

As I was editing this book, I was really blessed. Of course, I know these life-changing truths, but to put them into a format where they can be reviewed in one sitting is powerful. It built up my faith even though I have taught these for decades.

I’m especially excited about the accompanying workbook. Many people use our study guides and workbooks to teach home Bible studies or Sunday school classes. Instead of going in depth on any one subject, this workbook gives an overview that will expose new people to the basics quickly. Then they can go back and further study the ones that most interest them. At the end of each chapter of the book, they will find a list of reference materials on that specific subject.

This workbook includes a CD-ROM that allows you to print as many copies of the Lessons as you like. They are formatted for discussion and are meant to be used to interact with those being discipled. There’s also a teacher section that gives additional information helpful in answering questions that may arise. It’s awesome!

In addition to the new book and the accompanying workbook, there is one other important ingredient that makes this different than any other offer. I have just completed teaching all sixteen of these messages on television. You can now order these messages in a four-DVD teaching As Seen on TV. It is perfect for discipleship.

Begin by having everyone read a chapter in the book. As a group, watch the program on that subject (approximately thirty minutes long). Then, go through the Workbook together. I believe this combination of condensed studies may be one of the most powerful discipleship programs we have ever put together.

I believe that the order in which the chapters are arranged is important too. The book starts with salvation and the baptism of the Holy Spirit, then the truth of who we are in the spirit, which is what the Lord used to totally change my life. It progresses through my teachings The True Nature of God and The Believer’s Authority, on to God Wants You Well and Self-Centeredness: The Root of All Grief.

In many respects, it is like our original Discipleship Evangelism material. That has sixteen lessons in each of three levels for a total of forty-eight lessons. Those materials have been used all over the world. In Uganda alone, around 500,000 people have gone through the course, and it has changed lives.

I met one Ugandan woman who pastored a church but didn’t know the grace of God. She had run off nearly everyone in her church by her harsh, legalistic teaching. But after going through the Discipleship Evangelism program, she finally got a hold of the true Gospel. She went to people individually and apologized for her mistakes, and the church began to grow.

Then one of the church members died. At the wake, while the others were visiting, Pastor Grace slipped into the other room with the corpse. After about twenty minutes, the man who had been dead for two days walked into the room where all the others were gathered. Needless to say, revival was on. Pastor Grace now has around 1,600 people in her church.

All of that came through discipleship. That’s what it’s all about. We have too many who have been saved but don’t truly know the Lord and the power of His resurrection. The single most important thing we can do to affect our lives is receive a good, solid revelation of God through His Word. I believe this new book and the accompanying material will help facilitate that. 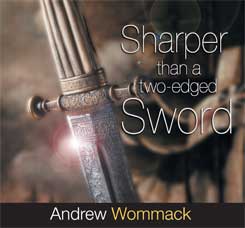 Sharper Than A Two-Edged Sword

Sharper Than A Two-Edged Sword is a compilation and summary of sixteen powerful messages that have changed the lives of thousands.