Source of All Grief

God created us to live our lives focused on Him. His purpose from the very beginning was that we should be “God-conscious,” not “self-conscious.” Until Adam and Eve ate the forbidden fruit from the Tree of the Knowledge of Good and Evil, they were so unconscious of self that they did not even consider their own nakedness. But after their disobedience, they became fully aware of themselves and wanted to hide from God. Their focus had shifted from God to self.

Self-consciousness is just another way of saying self-centeredness, and self-centeredness really is the root of all grief. People grieve or are unhappy for a lot of reasons. But, if they analyze it, they would find that it is always the result of self being deprived of wants. So, the answer to dealing with grief can be found in dealing with self.

For example, financial problems often come when we try to live above our means, attempting to fulfill self-centered desires. It’s not that I am against prosperity – I’m not. But it’s important to have the right perspective. If you’re miserable or unhappy over the fact that you don’t have a bigger home, a newer car, or a wide-screen television, something is wrong. It’s our self-centeredness that turns a want into a need and then that need into a personal crisis.

It breaks my heart to see so many Spirit-filled believers acting just as selfishly as the world. Trying to use God to obtain the things they couldn’t get in the world, they’re still focused on what’s in it for them. They either never knew or have forgotten some of the most important scriptures in the Bible concerning finances.

“But seek ye first the kingdom of God, and his righteousness; and all these things shall be added unto you.”

God has already promised that our needs are met in Him and that they will be added to us as a byproduct of seeking His kingdom first. It’s completely unnecessary to focus our attention on trying to get something from God that He has already provided. When we do, it leads us right back to the door of self-centeredness.

Even in the case of the death of a loved one, our grief is rooted in our personal loss. We focus on the situation from our point of view: How can I go on without them? I won’t ever see them again on earth. We convince ourselves that we are mourning over the death of these people, but it’s really over how it will affect us. If that person was born again and is now with Jesus, it should be a time to rejoice. Let’s imagine the atmosphere of a believer’s funeral if we focused on the one who was with Jesus and what that person was experiencing rather than our own self-centered thoughts about what we are losing? Instead of grieving, what an exciting time of thanksgiving and praise it would be!

Another huge source of grief is the grief that many of you experience in your relationships with other people. Why? Because when you are focused on self, it’s easy to be offended. If you’re experiencing bitterness, hurt, or anger in a relationship with your boss, a friend, or as is most often the case, someone in your own family, God’s Word leaves you no room to misunderstand the reason.

“Only by pride cometh contention.”

This verse makes it clear that pride is the source of all contention. I know that a lot of people don’t want to hear this, but it’s not circumstances or the personalities involved in their situations that causes them grief – it’s their pride. Pride is not a leading cause of contention; it’s the only cause.

However, pride is like a stick – it has two ends. Most can clearly see the end that represents arrogance and haughtiness, but they fail to see the other end, of low self-esteem, false humility, timidity, or shyness.

People who consider themselves timid or shy are really just full of pride. Their low self-esteem causes self to dominate their thoughts. They are so focused on what other people may think if they say or do something wrong. To protect self, they become timid and shy, causing themselves much grief. If they were asked to give a testimony or lay hands on someone for prayer, their pride would prevent it. They would not take the risk of SELF being criticized.

Those with false humility, on the other hand, believe that to debase self is humility, and to exalt self is pride. But that’s wrong too.

“Humble yourselves in the sight of the Lord, and he shall lift you up.”

What happens when you humble yourself (with the correct understanding of true humility), and God starts to exalt you? The truly humble will let Him, but the proud won’t. They are too concerned about what others think and will try to deflect it by debasing themselves. It’s just another form of pride.

True humility is agreeing with what God’s Word says about who you are and doing what God’s Word says you can do. Then, quit worrying about what people may think, whether they praise you or condemn you – it just doesn’t matter when you are truly humble and dead to self.

I had to work through this very thing when I first started ministering. God used a wise man to set me free when he said, “Andy, if you ever get more concerned about the people you are ministering to than you are about yourself and what they think of you, God will use you!” That meant I had to humble myself and accept the fact that God had a message to deliver through me. As a man who was so introverted that I could hardly look someone in the eye, I had to die to self and become alive in Christ.

“It is a faithful saying: For if we be dead with him, we shall also live with him.”

“I am crucified with Christ: nevertheless I live; yet not I, but Christ liveth in me: and the life which I now live in the flesh I live by the faith of the Son of God, who loved me, and gave himself for me.”

These Bible verses teach that we are supposed to be dead to self and alive in Christ. And if we are really dead, it would be impossible to be offended. Dead people never feel a thing. They can be kicked, insulted, or even lied about, and they just don’t care. The reason we are so easily hurt or offended is that we are still alive to self and full of pride.

However, if we focus on becoming dead to self and alive in Christ, we will probably fail. I used to resurrect self every morning in prayer while trying my best to kill it. I confessed all of the sins I thought I had committed: “Pride! Arrogance! Failure to study the Word!” On and on it would go until at the end of my devotional time, I had spent the entire time focused on myself. Stupid, stupid!

The correct way to deal with self is to shift your focus. Find someone who needs prayer or ministry. Help them in their situation, and you will find yourself forgetting about your own needs. You’ll also discover that what you thought was so important is really insignificant. Love for another person will always overcome self. It will require that you give yourself away and become a living sacrifice, but it’s worth it.

But our ultimate focus has to be on God, not just others and certainly not on ourselves. It’s only when we are totally surrendered to God that we can love others who violate our selfish interests.

“I beseech you therefore, brethren, by the mercies of God, that ye present your bodies a living sacrifice, holy, acceptable unto God, which is your reasonable service.”

Isn’t it interesting that self-sacrifice is considered by God to be our reasonable service? To do that, we must humble ourselves, reject self as “lord,” and lay it on the altar. The only problem with living sacrifices is that they tend to crawl off the altar. Even if we make this commitment in our hearts right now, we’ll have to renew it again tomorrow, next week, next month, and next year. As long as we are here on earth, we will have to make the decision to love Jesus more than self, every day.

In a day when self is being exalted to the max, understanding the consequences or the fruit of self-centeredness is critical. In the end, it will only lead to grief. To help you, I have a booklet called Self-Centeredness: The Source of All Grief. Or you can get the message on a single audio CD. It may ruffle a few feathers, but it will help you understand the truth about self-centeredness. And if you’re willing to apply what you learn, it will set you free from the grief you’re experiencing in your life. 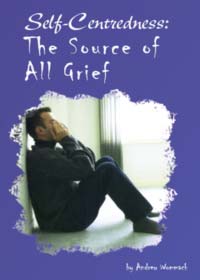 Self-Centeredness: The Source of All Grief

Difficult situations have a way of revealing the heart. Andrew reveals how love, joy, and peace can be yours, even in the worst of situations.