Are you truly happy? Selah (pause and think on that for a moment). That’s a huge question. For most Christians, if they’re honest, they’d have to admit that their happiness is very conditional. It’s sad, but it’s true. Circumstances control most people’s happiness. But that’s the problem: True joy and happiness don’t come from circumstances.

The Apostle Paul gave us a great example of this. He had a vision from God that he was supposed to go minister to the people in Macedonia.

And a vision appeared to Paul in the night; There stood a man of Macedonia, and prayed him, saying, Come over into Macedonia, and help us. [10] And after he had seen the vision, immediately we endeavoured to go into Macedonia, assuredly gathering that the Lord had called us for to preach the gospel unto them.

Even though Paul and his companion Silas had a divine mandate from God to go and minister there, everything didn’t go perfectly. Within just a few days, they were beaten and thrown in the worst part of the prison with their feet and hands in stocks (Acts 16:16-24).

But look at Paul and Silas’s response to this:

And at midnight Paul and Silas prayed, and sang praises unto God: and the prisoners heard them.

This is awesome! After the awful treatment that these two men endured, they were giving thanks – praying and singing praises unto God. They were so loud, in fact, that the other prisoners could hear them. And if you look this up in the Greek, it literally means that the prisoners hung on every word Paul and Silas were singing. They weren’t just listening with their physical ears; they were listening with their hearts. Their praise ministered to the prisoners. When was the last time your praise in a terrible situation ministered to someone?

The prisoners were so blessed by Paul and Silas that when an earthquake came and the prison doors were opened and all of the chains fell off, none of them left:

And suddenly there was a great earthquake, so that the foundations of the prison were shaken: and immediately all the doors were opened, and every one’s bands were loosed. [27] And the keeper of the prison awaking out of his sleep, and seeing the prison doors open, he drew out his sword, and would have killed himself, supposing that the prisoners had been fled. [28] But Paul cried with a loud voice, saying, Do thyself no harm: for we are all here.

Paul and Silas’s praise released God’s power. You see, praise to God blesses you, drives away the devil, and blesses God (check out my book The Effects of Praise). When you find yourself in an adverse situation and you offer genuine praises to God, you put yourself in a position to receive from Him! Praise is the key that unlocks God’s treasures.

Just as praise was a key to Paul’s success, it has been a huge part of my life. When my son died, I believe my decision to praise the Lord anyway was a major factor in him being raised from the dead. Thank You, Jesus! Praise is powerful!

Paul wrote under the inspiration of the Holy Spirit to “rejoice in the Lord alway: and again I say, Rejoice” (Phil. 4:4). This is such a radical concept, and I believe it’s the reason he repeated it. He didn’t want anyone to think this was a mistake. Rejoicing is a command.

The whole world needs to hear this. People are doing everything within their power to be happy, but it’s still elusive to most. We have more suicide and drug usage than ever before because people aren’t happy. True joy can only be found in the Lord (Ps. 16:11).

I will bless the Lord at all times.

It says “all times.” That means you can rejoice when circumstances are good and when they aren’t. You can look at people who appear to have the ideal circumstances – politicians, movie stars, athletes, etc. They have plenty of money, fame, recognition, and even the praises of some people. Many idolize them. Yet while they’re in possession of everything in the natural, many of them are miserable. They aren’t happy people. I’m telling you, happiness is not dependent upon circumstances. It is a state of mind, not a state of being. Paul understood this. Some people have never thought of him as a happy person, because of all the terrible circumstances he endured, but he was. He knew the secrets to happiness.

I’ve identified twenty things from Paul’s own writings that were keys to his happiness. These are timeless truths that will work for you today just as they did for him. I’ve made a new teaching on this entitled Paul’s Secrets to Happiness. Paul said he had learned to be content (Phil. 4:11). You can too.

Really, these aren’t secrets. They are hidden in plain sight in Paul’s letter to the Philippians. This letter was written by Paul when he was in prison, facing possible execution, yet the book of Philippians mentions joy and rejoicing more than any other letter Paul wrote.

I encourage you to get this brand-new teaching. And please consider getting an extra set or sharing yours with someone else. This will make a difference in people’s lives. You can order this CD series or DVD series by visiting our website: store.awmaust.net.au or calling our Helpline: +61 7 3177 7681. You can rejoice and be victorious in every situation. If Paul could do it, you can too! 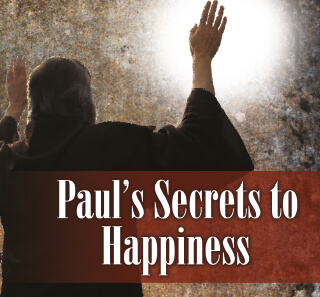 Many Christians strive to achieve happiness. Few, however, have understood, much less followed, what the Bible says to get there.