Whatever problem you’re facing today – whether in your finances, in your health, in your marriage, or wherever – your problem is not bigger than what David faced. He had to deal with a real, live giant. And the qualities God instilled in David that enabled him to succeed will work for you too. You’ve probably heard the story of David defeating Goliath, but have you applied these same principles to your giant? One of the foundational truths that enabled David to face this giant was that he viewed the whole situation through God’s covenant:

What shall be done to the man that killeth this Philistine, and taketh away the reproach from Israel? for who is this uncircumcised Philistine, that he should defy the armies of the living God?

David’s reference to Goliath being uncircumcised was pointing out that Goliath didn’t have any covenant rights like he did. In fact, every Israelite soldier was one of God’s covenant people, but they didn’t act like it. Likewise, all true believers have covenant rights to health, prosperity, joy, peace, etc., but not all look at their circumstances through the covenant.

These Israelite soldiers were looking at Goliath and not at God’s promises. The Lord had promised them that no man would be able to stand before them (Deut. 11:25). Goliath was a man. He was a big man but a man nonetheless. While others only saw the giant, David kept his attention on the promises of God.

When David voiced his faith in the covenant of God despite the circumstances, he began to be criticized by his brother and others:

And Eliab his eldest brother heard when he spake unto the men; and Eliab’s anger was kindled against David, and he said, Why camest thou down hither? and with whom hast thou left those few sheep in the wilderness? I know thy pride, and the naughtiness of thine heart; for thou art come down that thou mightest see the battle. [29] And David said, What have I now done? Is there not a cause? [30] And he turned from him toward another, and spake after the same manner: and the people answered him again after the former manner.

David could have tried to justify himself to his oldest brother. It was at his father’s command that he had left the sheep and come to bring gifts to his brothers. But even if David had won the argument, he would have lost his opportunity to defeat Goliath. It was only after he turned from his brother and repeated his statements of faith that someone heard what he said and told Saul, Israel’s king.

You might face opposition, even from family members, when you start communicating what God has put in your heart, but you need to take this stance like David did, saying, “Is there not a cause?” Ask yourself, “Is the thing I want victory over worth fighting for?” If it is, then you have a cause greater than what others think.

Even the king tried to talk David out of what was in his heart: He spoke of David’s inexperience and size compared to Goliath’s. But look at David’s reply –

Thy servant kept his father’s sheep, and there came a lion, and a bear, and took a lamb out of the flock: [35] And I went out after him, and smote him, and delivered it out of his mouth: and when he arose against me, I caught him by his beard, and smote him, and slew him. [36] Thy servant slew both the lion and the bear: and this uncircumcised Philistine shall be as one of them, seeing he hath defied the armies of the living God. [37a] David said moreover, The Lord that delivered me out of the paw of the lion, and out of the paw of the bear, he will deliver me out of the hand of this Philistine.

He began to rehearse to King Saul the victories the Lord had given him. Had David not been faithful with the few sheep the Lord had given him to keep on the backside of the desert, he never would have been able to stand up to Goliath. Many want to win against the giants when the grandstands are full, but few will be faithful in the little things God gives them when no one is watching. If we aren’t faithful in that which is least, we won’t be given more (Luke 16:10-12).

David’s faith and confidence in the Lord convinced King Saul to let him represent Israel and go fight Goliath. This was a miracle in itself. If David lost, all the Israelites would become slaves to the Philistines. I think Saul recognized the anointing of God upon David. Saul had once operated under that anointing, and knew how powerful it was. So, he let David go, but he tried to put his armour on him:

This happens all the time. People will tell you your faith in God won’t overcome your giants. But if you persist, then they will try to give you their advice on how to fight the battle. That’s what Saul did. He wanted to give David his armour. But why should David put his faith in Saul’s armour? It hadn’t done anything for Saul. Saul was fearful of Goliath just like all the rest. David was wise to stick with what had already been proven in his life.

Next, David had to endure the mockery of his enemy, Goliath. Listen to what the giant said:

Don’t think that just because you’re armed with what God has given you that the giants in your life will be intimidated by you. But you’ve got to be bold and stand strong in the face of the enemy, like David did:

Then said David to the Philistine, Thou comest to me with a sword, and with a spear, and with a shield: but I come to thee in the name of the Lord of hosts, the God of the armies of Israel, whom thou hast defied. [46] This day will the Lord deliver thee into mine hand; and I will smite thee, and take thine head from thee; and I will give the carcases of the host of the Philistines this day unto the fowls of the air, and to the wild beasts of the earth; that all the earth may know that there is a God in Israel. [47] And all this assembly shall know that the Lord saveth not with sword and spear: for the battle is the Lord’s, and he will give you into our hands.

But David wasn’t all talk! Look what he did when Goliath approached him:

David hasted, and ran toward the army to meet the Philistine.

The Spirit of the Lord was on David; he wasn’t afraid! He rushed at this giant. You know, your attitude toward your giants will be very telling when it’s time to face them. If you really believe the promises of God, you won’t run from a fight – you will run to it. Do you really believe what God said or not? Are you all talk? The giants are going to test what God has put in you.

Of course, you know the story. David used his sling and a stone to bring the giant down.

But David didn’t stop there:

But there was no sword in the hand of David. [51a] Therefore David ran, and stood upon the Philistine, and took his sword, and drew it out of the sheath thereof, and slew him, and cut off his head therewith.

You’ve got to pursue your enemies until they can’t come back! If you read the whole story, the Philistines didn’t flee when Goliath first went down. They were at a far distance and didn’t know exactly what had happened. Goliath could have tripped, or maybe he was just wounded and would get back up and win yet. But when David cut off his head and held it up, all doubt was removed, and the enemy fled.

We sometimes just fight our enemies until they go over the hill. They are left to fight us another day. We only fight sickness until it gets to where it’s not too bad – we can live with the rest. But David pursued his enemies until they were destroyed. They could never come back to fight him. First Samuel 30:10-18 is a good example of this, where David pursued the Amalekites until he had recovered all he had lost.

People don’t like to face giants, but David wouldn’t have been a hero if he had slain a midget. The giants in your life are actually great opportunities for God to show Himself strong on your behalf. My greatest tests have become my greatest testimonies. If you don’t have a test, you only have “a mony.”

David’s victory over Goliath catapulted him into his destiny. Likewise, whatever giant you are facing can become the greatest victory in your life as you stand on God’s Word and overcome it. I remember when my son died. It was a terrible thing. But because Jamie and I stood against this giant that tried to take our son, we now have a glorious testimony of his resurrection that we have rubbed the devil’s nose in countless times. Praise God! Your victory is coming too. 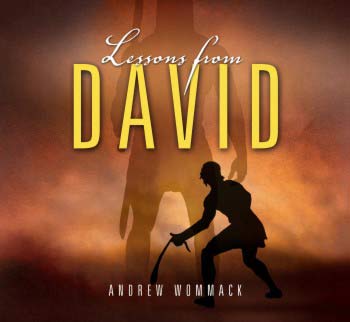 This teaching looks at the life of David, the only person the Lord called “a man after mine own heart,” and makes direct applications to our lives today.