How To Prepare Your Heart

Relatively few people are determined to do evil. They don’t wake up in the morning seeking ways to transgress. Rather, they fall into sin because they have not prepared their hearts to seek the Lord.

This passage in 2 Chronicles 12:14 is speaking of Rehoboam, the king of Israel, who was the grandson of David. He inherited the throne when he was 41 years old, at the death of his father Solomon. In the beginning of his reign, his heart was sensitive to the Lord. He turned back from battle simply because of a prophet who spoke to him in the name of the Lord (2 Chr. 11:1-4).

However, his seeking the Lord only lasted for three of the 17 years of his reign (2 Chr. 11:17). Sound familiar? It certainly does to me. During the time I have been in the ministry, I have known thousands of people who genuinely loved the Lord at one time and were excited about the things of God, yet they grew cold and, in many cases, completely abandoned the Lord and the things that were once so dear to them. How can this be? Why does this happen? It’s because they didn’t prepare their hearts to seek the Lord.

The word “prepare” means “to establish, fix, prepare, or apply.” It conveys the idea of deliberate effort over a prolonged period of time. The same Hebrew word that was translated “prepare” here was also translated “fixed” four times in the Old Testament, all spoken by David. David used this word twice in Psalm 57:7, which was a psalm he wrote about the time he was hiding in a cave, and Saul, the king who was trying to kill David, came into that exact cave.

David’s men tried to get David to kill Saul and seize the throne which was rightfully his, but David wouldn’t do it. Why? Wasn’t Saul trying to kill David? Wouldn’t it have been considered self-defence? No one would have blamed him. He could have gotten away with it and have saved years of frustration and pain in his own life. But David had already prepared, or fixed, his heart that he would not take the kingdom by killing Saul.

The word “fixed” means: “1. firmly, in position; stationary 2. Not subject to change or variation; constant 3. Firmly held in the mind; a fixed notion” (American Heritage Dictionary). One of the keys to preparing our hearts is to fix our hearts on what we will and will not do before we encounter the temptation. David had already settled what he would do so that there were no options left when the temptation came. Far too often, Christians have not made strong enough commitments and, therefore, succumb to temptation.

Of course, no one can accomplish preparing their heart on their own. This is not a matter of sheer “willpower.” God must be involved in preparing our hearts. Psalm 10:17 says, “LORD, thou hast heard the desire of the humble: thou wilt prepare their heart.” Only when we trust in the Lord and depend on Him can we find the strength to make our hearts not subject to change or variation. Humility is an essential ingredient in the preparation of our hearts.

Proverbs 16:18 says, “Pride goeth before destruction, and an haughty spirit before a fall.” Anytime anyone falls from their steadfast position in the Lord, you can bet that they got out of humbly depending on the Lord. Humility has to be forsaken, or at least neglected, before we fall. A humble heart makes a soft, sensitive heart.

Our imaginations and our memories are also an important part of preparing our hearts. David said in 1 Chronicles 29:18, “O LORD God of Abraham, Isaac, and of Israel, our fathers, keep this forever in the imagination of the thoughts of the heart of thy people, and prepare their heart unto thee.” David was speaking about remembering and the part that imagination played in our memories.

In context, David had just given offerings toward the building of the temple in Jerusalem that totalled in the billions of dollars (1 Chr. 29:4). Then the elders of Israel did the same (1 Chr. 29:6-7). It must have been an awesome experience, and David prayed that the Lord would use the memory of this event to prepare the people’s hearts.

The power of memory is a vital part of preparing our own hearts. The Lord warned the children of Israel not to forget the mighty works He had performed for them lest they turn away from following Him (Deut. 4:9, 23; 6:12; 8:11-14, 19). He linked memory to staying true to the Lord.

No one who was dominated with thoughts of the goodness and faithfulness of the Lord would turn their back on the Lord. To turn from the Lord, Satan has to divert our attention from the Lord and block the memories of God’s goodness to us. Keeping our positive memories alive will keep our hearts knit to the Lord. 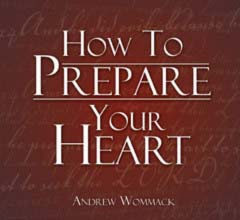 How To Prepare Your Heart

True believers don’t plan to depart from the Lord – they just fail to prepare their hearts before temptation comes suddenly upon them.

How To Prepare Your Heart
WordPress Image Lightbox Plugin