How To Hear God’s Voice

One of the greatest benefits of our salvation has to be that of hearing God speak to us personally. There can be no intimate relationship with our heavenly Father without it. But, as easy as it is for us to speak to Him, the average Christian has a hard time hearing His voice. This is not the way the Lord intended it to be.

Learning to clearly distinguish God’s voice is invaluable. Instead of going through life blindly, we can have the wisdom of God guide and protect us. There isn’t a single person receiving this letter who couldn’t have their life radically transformed by hearing the voice of the Lord better. The worst marital problem is one word from the Lord away from a total turnaround. If you have sickness or disease, one living word from the Lord will instantly heal you. If you are in financial crisis, the Lord knows exactly how to turn your situation around. It’s just a matter of hearing His voice.

The Lord constantly speaks to us and gives us His direction. It’s never the Lord who is not speaking, but it’s us who are not hearing. Jesus made some radical statements about hearing His voice in John 10:3-5. He was speaking about Himself as the Shepherd of the sheep and the only way to enter the sheepfold.

Radio and television stations transmit twenty-four hours a day, seven days a week; but we only hear them when we turn the receiver on and tune it in. Failure to hear the signal doesn’t mean the station isn’t transmitting. Likewise, God is constantly transmitting His voice to His sheep, but few are turned on and tuned in. Most Christians are busy pleading with God in prayer to transmit when the problem is with their receivers.

The first thing we need to do is fix our receivers – believe that God is already speaking and start listening. However, that takes time, effort, and focus. The average Christian’s lifestyle is so busy, it isn’t conducive to hearing God’s voice. For instance, what is your typical answer to the question, “How are you?” Many of you probably answer something about being very busy. I often say, “I’m busier than a one-arm paper hanger.” All of us seem to be busier than ever, and that’s one of the BIG reasons we don’t hear the voice of the Lord better. We’re just too busy.

It’s in stillness, not busyness, that we tune our spiritual ears to hear the voice of God. The Lord always speaks to us in that “STILL, small voice” (1 Kings 19:12, emphasis mine), but often it’s drowned out amid all the turmoil of our daily lives.

This is saying that communication with God is Spirit to spirit, not brain to brain or mouth to ear, the way we communicate in the physical realm. The Lord speaks to our spirits, not in words, but in thoughts and impressions. Then our spirits speak to us in words like, “I think the Lord wants me to do this or that.” The Lord doesn’t typically say “You do this or that,” but He will impress your spirit to do something, and then your spirit says, “I think I should do . . .” Therefore, we often miss the leading of the Lord, thinking it’s our own thoughts.

Every one of us has done something stupid and afterwards said, “I knew that was the wrong thing to do.” We didn’t feel right about our decision, but we followed logic or pressure only to find that our impression was actually the Lord speaking to us. I learned this the hard way while pastoring in Pritchet, Colorado.

All the elders of the church were custom combiners. Six months of the year, they were gone following the wheat harvest. They insisted that we ordain another elder who would always be there. Their choice for eldership, I had nothing against, but as I prayed about this man and his wife, I didn’t feel right ordaining him as an elder. However, being a man, I went with logic instead of my heart.

Within two weeks of the others leaving for wheat harvest, this new elder turned into the devil himself. In his reports to the elders, he accused me of stealing money from the church, committing adultery, drinking, smoking, and everything else you can imagine. It was a terrible experience. As soon as this man showed his true colors, I knew in my heart that the feelings and thoughts I had were the Lord speaking to me, and I had dismissed them as my own. I made a decision right then and there that I would never ignore my heart again.

“Delight thyself also in the LORD; and he shall give thee the desires of thine heart.”

I once was planning a trip to Costa Rica, a place I had been before, and was excited to be returning to. Yet, as I prayed about it, I lost my desire to go. Instead, I actually felt dread about going. The first thing I did when that happened was make sure I was really seeking the Lord with my whole heart. While on a road trip, I spent seventeen hours praying in tongues, and the more I got my mind stayed on the Lord, the less I wanted to go back to Costa Rica. On the strength of that alone, I canceled the trip.

When the people of Costa Rica asked why, all I could tell them was I didn’t want to go. That was hard to do, and I’m not sure they understood. The plane I had booked my flight on crashed on take-off from Mexico City, killing all 169 persons onboard. The Lord warned me of that and saved my life, not by saying, “Don’t go to Costa Rica,” but, by communicating to my spirit and taking away my desire to go. That is the dominate way the Lord speaks to us, and we often miss that kind of communication.

One of the most important decisions of my life came in 1968. I was in college when the Lord radically touched my life, and all my desires changed. I didn’t want to be in college anymore, and following those new desires, I made the decision to quit school. Then all hell broke loose. My mother didn’t understand, and she quit talking to me for a time. Leaders in my church told me I was hearing from the devil. I stood to lose $350 per month in government support from my father’s social security, and I would lose my student deferment from the draft. Without the deferment, I stood a good chance of ending up in Vietnam.

Because of these adverse reactions to my decision, I backed off for a while and was absolutely miserable. This continued for two months until I couldn’t take it anymore, and one night the Lord finally spoke to me through Romans 14:23, which says,

“Whatsoever is not of faith is sin.”

I realized I was in sin because of indecision. I determined to make a faith decision that night and stick with it. As I prayed and studied the Word for guidance, I found Colossians 3:15, which says,

“And let the peace of God rule in your hearts.”

The Lord spoke to me that I was to head in the direction that gave me the most peace. To be truthful, I didn’t have total peace in any direction, but just as an umpire has to make a decision and stick with it, I needed to make the call. I had the most peace about quitting school, so I made the call and stepped out of indecision into faith, to the best of my understanding. Within twenty-four hours the Lord gave me such confirmation and joy that I have never doubted the wisdom of that decision since. That one decision, possibly more than any other, set my life on a course that has brought me to where I am today.

I am convinced that our gracious heavenly Father speaks to every one of His children constantly, giving us all the information and guidance we need to be total overcomers. There isn’t a problem with His transmitter; it’s our receiver that needs help.

I have a three-part teaching album called How to: Hear God’s Voice that expounds on this in greater detail. I teach this every year to our second-year CBC students and see powerful results. Most people are imploring God to speak, when it’s our hearing that needs to be adjusted. Taking this faith-stance that God is speaking and then learning to listen and obey will transform your relationship with the Lord. It could save your life just as it did mine. 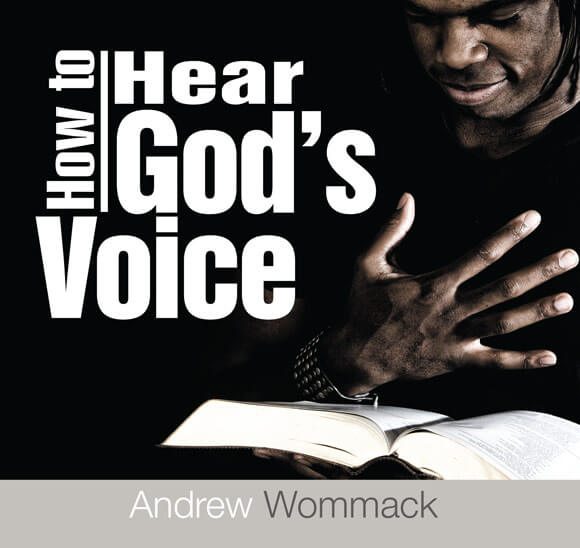 How To Hear God’s Voice

The Lord knows all things and will show us things to come. If we can tap into His heart by hearing Him speak to us, all would be different.