How To Deal With Grief

The dictionary defines “grief” as, “deep sadness, as over a loss; sorrow” (NAHD). This is not limited to, but certainly includes, the loss of a loved one. It includes the sense of loss that many feel for those who died in the terrorist attacks. People grieve over the loss of relationships, careers, youth, innocence, and many other things.

Those who have lived any length of time are well acquainted with grief and know that it is an inescapable part of life. We cannot avoid all grief, but we can avoid all the destruction that grief can cause.

One of the first things I always minister to those experiencing grief is that their situation isn’t unique. I think this is very important. One of the devil’s most deceptive ploys is to make you think that no one else knows what you are going through. There have even been songs written about, “Nobody knows the trouble I feel, nobody knows my sorrow.” That just isn’t true.

The Scripture says very plainly, “There hath no temptation taken you but such as is common to man” (1 Cor. 10:13). Any situation you find yourself in is not only experienced by others, but it is a common experience to us all. This is very important to understand. If Satan can make you believe your situation is unique, then you automatically exempt yourself from all help that is available. Regardless of how others attempt to help, you remain beyond their reach because, in your mind, they haven’t experienced your loss and therefore can’t understand or help you. That isn’t true.

To truly heal and move beyond grief, you need others. Self-pity, and every other destructive result of grief, can only function in isolation. When exposed to the joy in others, the negative effects of grief begin to die, just as a mould does when it is exposed to light. If Satan can cut you off from others, then it’s like a wolf separating a sheep from the flock: you are easy prey.

The Apostle Peter spoke about the devil (1 Pet. 5:8) and then said, “Whom resist steadfast in the faith, knowing that the same afflictions are accomplished in your brethren that are in the world” (1 Pet. 5:9). Peter said there was comfort in knowing that others are experiencing the same problems.

In the early days of our ministry, people stayed away from our meetings by the droves. I was having a hard time coping with that. It was causing me grief. Then I went to some of Kenneth Copeland’s first public meetings.

He rented the Will Roger’s Memorial Auditorium in Fort Worth for a three-day meeting. That auditorium seated 3,500, but he only had one or two hundred there at the most. When I saw that Kenneth was experiencing the same numbers problem I was, it really encouraged me. It didn’t bless me that people weren’t coming to his meetings, but I took courage that someone whom I knew was anointed was experiencing the same problems that I was.

Those experiencing grief need to see that others have experienced similar things and have lived through it. In fact, people go on to thrive, not just survive. Anyone who refuses the encouragement and hope that comes from observing others who have moved on with their lives will have a very hard time experiencing victory by themselves.

Another very comforting thing to remember in a time of grief is that the situation is only temporary. One of my favourite phrases in the Bible is, “It came to pass.” That’s why it came: to pass. No tragedy is permanent. Even death is only a temporary separation.

This is exactly the logic the Apostle Paul used to comfort those who had lost someone they loved. In 1 Thessalonians 4:13-18, he said, “But I would not have you to be ignorant, brethren, concerning them which are asleep, that ye sorrow not, even as others which have no hope. For if we believe that Jesus died and rose again, even so them also which sleep in Jesus will God bring with him. For this we say unto you by the word of the Lord, that we which are alive and remain unto the coming of the Lord shall not prevent them which are asleep. For the Lord himself shall descend from heaven with a shout, with the voice of the archangel, and with the trump of God: and the dead in Christ shall rise first: Then we which are alive and remain shall be caught up together with them in the clouds, to meet the Lord in the air: and so shall we ever be with the Lord. Wherefore comfort one another with these words.”

Death is not a permanent split for believers. It is just a long separation. We will be united with those who have died. Remembering this will bring comfort (1 Thess. 4:18) and can even provide a lot of positive motivation.

Putting all our tragedies into the perspective of eternity also minimizes their impact on us. Many of the things people grieve over will be totally forgotten in a year. All tragedies will be totally forgotten in eternity as we experience the comfort of the Lord in full measure. Romans 8:18 says, “For I reckon that the sufferings of this present time are not worthy to be compared with the glory which shall be revealed in us.”

Paul suffered more persecution than any of us ever have. It not only involved physical torment but emotional pain that most of us can’t even imagine; yet he was able to call all his trouble just a “light affliction” (2 Cor. 4:17). If Paul’s suffering was greater in quantity and quality than ours, how can we justify calling our burdens great?

His affliction wasn’t light because it was less than ours, but because he put it into a different perspective. He said his afflictions were light because they were “but for a moment” (2 Cor. 4:17). After a million years in the presence of the Lord, all the hardships of his life would seem like nothing. That’s true for all of us.

I once had a woman tell me about her terrible situation and ask for prayer for her marriage. She was facing her fourth divorce, and she didn’t think she could survive another one. She told me she wasn’t a Christian, but she knew prayer worked and wanted me to pray for her.

I said, “Now, let me get this straight. You aren’t a Christian, and you know you are headed for hell; yet you want me to pray for your marriage and not your salvation?” She said, “Yes.” I said, “After you’ve been burning in hell for a thousand years, you won’t even care whether you were ever married or not. Your marriage isn’t the important thing. We need to pray for your salvation!” She agreed and I had the privilege of leading her to the Lord! We then prayed for her marriage.

God cares about our marriages and wants them to work, but I’m saying that in light of eternity, marriage is not the most important thing. Remembering this will help those who have suffered tragedy in their marriages.

Many people today have exalted lots of things to a level of importance that reflects how temporally minded they are. When we think of all that’s awaiting us in eternity, our problems shrink down to a manageable size.

Probably the most important thing I minister to those experiencing grief is that God is not the source of their grief. I believe this is absolutely essential. Anyone who believes that God directly causes their grief, or indirectly allows it to happen, is headed for trouble.

Many people are totally shocked at that last statement. It is assumed by most that nothing can happen without God’s approval. It’s like God has a big desk in heaven. All orders have to originate from there, or at least pass through there to get His stamp of approval. That is not so. Lots of things happen that God has nothing to do with.

Look at 2 Peter 3:9. It says, “The Lord is not slack concerning his promise, as some men count slackness; but is longsuffering to us-ward, not willing that any should perish, but that all should come to repentance.” You can’t get it any clearer than that. It is not God’s will for any to perish, but they do. Jesus even said most would enter through the broad gate into destruction instead of the narrow gate that leads to everlasting life (Matt. 7:13-14). This is directly against God’s will. It is not God who destines people to go to hell, and it’s incorrect to say God allows it.

The Lord does everything possible to stop people from going to hell. He sent His only begotten Son to earth to bear our sins. He sent His Holy Spirit to convict us and draw us to Him. He sends labourers across our paths. Any person who goes to hell will have to climb over all these roadblocks that the Lord has put in their way. It’s not God allowing them to go to hell. It’s people’s own free will that God gave them which causes their destruction, not God.

Believing that God causes or allows the things that bring us grief genders many bad things. For one, it turns many people against the Lord.

I was just with a man who was fighting for his life. He has been to death’s door many times. He was believing that the Lord was allowing all of this to teach him something. He attributed his illness to the Lord.

His wife was so hurt by watching him suffer that she’s become bitter. She wouldn’t go with him to some of the meetings where he was seeking healing. He didn’t understand why. I told him that if I was his wife and I thought God was destroying the person I loved, I would be bitter toward God too. That’s what’s happened to many people.

Two very famous people, whom all of you know, have inadvertently testified to this truth. They have said their antagonism against the Lord stemmed from people they loved who died or suffered, and the church told them this was the work of God. They turned against the Lord by their own admission and have influenced many others to do the same.

This is all a result of Christians incorrectly ascribing to God a sovereignty that makes Him responsible for everything that happens. That is not what the Bible teaches. In situations that cause grief, it is very comforting to know that God is not the author of, nor the one who allows our tragedies. The Lord is not insensitively standing by and allowing us to suffer. He is touched with our feelings (Heb. 4:15) and has sent His Holy Spirit to comfort us in whatever trial may come (2 Cor. 1:3-4).

This article covers only a very small portion of the material included on my four-part album entitled, How To: Deal With Grief. This is not just for those who have lost loved ones. It will reveal principles that will work to overcome all of life’s disappointments. 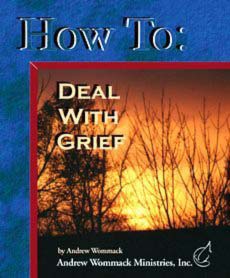 How To Deal With Grief

Grief is something that each one of us encounters sooner or later. It cannot be avoided, but it can be dealt with in a positive way. This series will help you to come out of grief on the victory side.
–

How To Deal With Grief
WordPress Image Lightbox Plugin