There are few things more controversial in the body of Christ than the baptism of the Holy Spirit and the accompanying gifts.

That type of belief puts them in conflict with the book of Acts and the very teaching of Jesus. Those who experience the power of the Holy Spirit today are labeled as fanatics or heretics. But what does the Bible have to say? What did Jesus say about this?

On the night before Jesus’ crucifixion, He made one of the most astounding statements of His whole ministry. John 16:7 records these words:

“Nevertheless I tell you the truth; It is expedient for you that I go away: for if I go not away, the Comforter will not come unto you; but if I depart, I will send him unto you.”

Grasp what Jesus is saying! Jesus said it is more beneficial for us to have the ministry of the Holy Spirit than it was to have Jesus present with us in His physical body!

Most Christians are totally shocked by this. They would give anything to have Jesus present in His physical body. How could anything be better than to physically see, hear, and touch Him?

Jesus knew His disciples would be shocked by His statement, so He prefaced it with the words, “I tell you the truth.” As hard as it may be to understand, the ministry of the Holy Spirit in the life of the believer is better than the earthly ministry of Jesus.

This is not to take anything away from His ministry on this earth. Without Jesus coming to the earth and accomplishing what He did, there could be no ministry of the Holy Spirit. The whole plan of God hinges on the redemptive work of Christ.

But, once His work was done, it was actually to our advantage to have Jesus return to His Father and send the Holy Spirit to take His place. Therefore, we shouldn’t lessen the preeminence of Jesus, but we should increase the importance of the Holy Spirit’s ministry.

Most Christians don’t realize how involved the Holy Spirit is in everything that the Lord does. They do not ascribe nearly enough importance to the Holy Spirit and what He is doing in the earth today. In Genesis 1:1-2, the Bible says,

In the beginning, God created all the elements needed for His creation. Then, everything else was formed from what had already been created. All the essential ingredients were in place. But nothing happened without the Spirit of God.

Notice specifically that the Spirit of God (the Holy Spirit) moved upon the face of the waters. The English word moved was translated from the Hebrew word “rachaph.” It literally means “to brood.” This is describing the manner of a hen sitting on her eggs to hatch them.

This perfectly illustrates the Trinity: God the Father, God the Son, and God the Holy Spirit. They are one. In fact, they are so much one that they can’t operate independent of each other. They are a team. Jesus didn’t do any miracles or start His public ministry until after He had been anointed with the Holy Spirit.

If Jesus couldn’t, or wouldn’t, operate independently of the Holy Spirit, neither should we. No one can have an effective life or ministry without the power of God’s Holy Spirit working in him or her. This fact can’t be argued by anyone who truly believes the Bible is God’s Word. The Scriptures are replete with proof that it is “not by might, nor by power, but by my Spirit, saith the LORD of hosts” (Zech. 4:6).

So, why is there so much debate over this issue? The sad truth is that denial of the ministry and power of the Holy Spirit is a convenient theology. Believing that miracles and gifts of the Holy Spirit don’t operate today excuses powerless living. If it’s true that the Holy Spirit is still willing to move as in biblical times (and it is true), then there is no excuse for living lives so far removed from the victory portrayed in God’s Word.

The number one reason people resist the ministry of the Holy Spirit is because it exposes the lack of power in their lives. And once exposed, it demands a change. In an attempt to avoid responsibility for change, they change the Scriptures instead of themselves. Of course, it’s not that blatant, but there is a predisposition against the ministry of the Holy Spirit, so the Scripture is twisted to support their views.

It’s now politically correct to say that alcoholics are not responsible for their actions, depression is a chemical imbalance, and homosexuality is genetic. We’ve even had lawsuits where overweight people sue fast-food chains for their obesity. No one wants to admit that their lives are the result of their choices and actions. It’s appealing to think that someone else is at fault for their messed up lives. Sadly, the lack of personal responsibility in our society has crept into the attitudes of the church.

But, the ultimate attempt to avoid responsibility is when we place the blame on God. This goes all the way back to Adam when he said, “It’s that woman that YOU gave me” (Gen. 3). He passed the “buck” to the woman and then ultimately blamed God. But God’s judgment shows that He held Adam responsible for his own actions.

Another group of Christians willingly accept a limited ministry of the Holy Spirit as their comforter and consoler, but they still deny His miraculous power. That’s convenient, the benefits without the responsibility. These are usually the ones who also believe there isn’t a second experience with the Holy Spirit beyond being born again. They may be sincere in their beliefs, but they are sincerely wrong.

There are many clear examples in Scripture where a miraculous encounter with the Holy Spirit enabled believers to live supernatural lives. Jesus taught about two separate experiences in the believer’s life.

In John 20:28, Thomas confessed Jesus as his Lord and God. That made him “saved” according to Romans 10:9-10. Yet, the Lord told Thomas and all the disciples to tarry in Jerusalem until they received the power of the Holy Spirit (Acts 1:4). The reason Jesus told them to wait on the baptism of the Holy Spirit was because they didn’t have it yet. Look what happened to the disciples once they received that power. They were changed men.

“But ye shall receive power, after that the Holy Ghost is come upon you: and ye shall be witnesses unto me both in Jerusalem, and in all Judaea, and in Samaria, and unto the uttermost part of the earth.”

After the Day of Pentecost, when the Holy Spirit came upon Jesus’ disciples, they were powerful. They faced persecution and death fearlessly. What made the difference? By Jesus’ own words, it was the baptism of the Holy Spirit.

In Acts 8, Philip preached to the Samaritans, and the whole city believed on Jesus and was baptized in water. They were saved. But Acts 8:15-16 says,

“Who, when they [the apostles] were come down, prayed for them [the Samaritans], that they might receive the Holy Ghost: (For as yet he was fallen upon none of them: only they were baptized in the name of the Lord Jesus)” (brackets mine).

This is a very clear example of people being born again but still needing to receive the Holy Spirit. This can also be witnessed in Acts 19. Paul found disciples who were not baptized in the Holy Spirit. He prayed for them, and they spoke with tongues.

Spirit filled, but no tongues!

There are other believers who acknowledge a second experience with the Holy Spirit which releases power, but they refuse the part of speaking in tongues, or at least say it’s not for everyone. But the baptism of the Holy Spirit is like a pair of tennis shoes: It always comes with tongues.

I guess it’s possible to have the baptism of the Holy Spirit and not speak in tongues, but why wouldn’t you want to? If you’re afraid, don’t be! There’s no reason to fear; you’re in full control. I’m not speaking in tongues as I write this, because it’s up to me to decide when I speak in tongues. It’s the same for you. You’ll control when you speak in tongues.

Maybe there’s something else that is holding you back. I know from experience that a person whose understanding of this gift isn’t right can stifle it. I did. In my case, a denomination had instilled such fear in me that I was afraid I would get something from the devil. It wasn’t until later that I learned the Lord wouldn’t let that happen (Luke 11:13).

Whether you’re not sure or just having a problem receiving, my teaching entitled The Holy Spirit will answer your questions and set you free to receive this powerful gift. My life was completely changed when I received the Holy Spirit. If it were not for that, you would never have heard of Andrew Wommack.

Here is a little of my personal story; it may help you. In 1957 I was born again at the age of eight. I loved God and served Him to a degree, but was basically powerless. I prayed six months for my Dad to be healed, but he died when I was only twelve years old. As a young man, I was introverted, timid, and so shy I couldn’t look people in the face when talking to them.

There wasn’t any difference between me and an unbeliever in terms of visible results. If I would have been arrested for being a Christian, there wouldn’t have been enough evidence to convict me.

My teaching, The New You and The Holy Spirit, is now available in book form, as well as in a CD or tape album. This is the same material I give to those who receive the baptism of the Holy Spirit at our Gospel Truth Seminars. It takes them from “A” to “Z” in the doctrine of this experience and shares very practical steps on how to receive the gift of speaking in tongues. Hundreds of people who were having trouble speaking in tongues were able to receive after reading the book or listening to this teaching. Every one of you knows people who haven’t received the baptism of the Holy Spirit, and this teaching could forever change their lives. 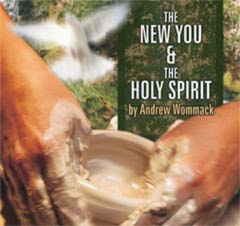 New You & The Holy Spirit

In this series, Andrew addresses the two most important events that will ever take place in a person’s life – first, receiving salvation through faith in Jesus Christ, and second, being filled with the power of the Holy Spirit.

The New You & The Holy Spirit
WordPress Image Lightbox Plugin