I have been blessed of the Lord to pray for thousands of people and see awesome miracles. It thrills me to see a person instantly healed or set free.

But do you know what thrills me even more? Having the people I minister to do the same miracles. Hallelujah! That’s my greatest joy.

Hopefully, the day of the one-man show is coming to an end. The only way we are truly going to change our world is to get every believer flowing in the power of the Holy Spirit. The Lord called us to make disciples, not just converts (Matt. 28:19-20). The ministry gifts are to perfect the saints so THEY can do the work of the ministry (Eph. 4:11-13).

From the very start of my ministry, the Lord directed me to take the things I’ve learned and train up faithful men and women who would be able to minister to others (2 Tim. 2:1-2). That’s why I’ve had a teaching ministry. As I’ve gotten older, the urgency is even greater. My time is limited. Anyone who isn’t training up others is ultimately a failure.

I’m glad to report to you that we are seeing more people get hold of the truths of God’s Word than ever before. I am constantly blessed to see others beginning to walk in the supernatural power of God. And these aren’t just full-time ministers. People in every walk of life are experiencing the normal Christian life.

My last trip to Uganda and South Africa, in July of this year, demonstrated this. I took the director of my Television Department with me, and he documented many miraculous testimonies of God’s awesome power. The story that Junade Eso and his wife shared was amazing:

“My wife and I were expecting a child. When the labour began, we went to the local hospital, which really wasn’t very good. After twenty-seven hours of very difficult labour, the baby was in trouble. When he was born, he was blue. There was no heartbeat and he was not breathing, nothing. He was dead. The nurses and the doctors were in a panic trying to resuscitate baby Benjamin (that was the name we gave him later).

“Let me stop here and say that a few weeks before the birth, my wife and I had been listening to Andrew’s preaching. His teachings on unbelief, The Believer’s Authority, and You’ve Already Got it! were affecting our lives and changing our outlook on Christianity.

“All I could think about while they were working on Benjamin’s lifeless body was speaking the Word of God and speaking the promises of God over his life. My wife wasn’t doing well after the delivery, but she continued to quote the Word. â€˜You will live, and you will not die,’ she would say.

“I must say I was subject to unbelief because all the doctors and nurses were in such a panic. So I called my pastor who couldn’t see what was happening. I told him we needed to pray, and he asked if Benjamin was alive. And I said, â€˜No, there is nothing happening, and they’re doing CPR on him now.’

“So we prayed and immediately after we said amen, I just took my eyes off the circumstances, focused on the Word of God, and Benjamin took his first breath. It was like our first breath as well. The scriptures that Andrew had taught us about speaking to the problem and the mountain just kept going through my mind. So every time the doctor gave a bad report, I would speak just the opposite.

“Benjamin was alive now, but the doctor said that because of the lack of oxygen, he would have brain damage. He said that on a scale of one to fifteen, he was a ten and would be retarded. There was nothing they could do. We continued to block out the negative and focus on the Word, as Andrew had taught us.

“Benjamin is ten months old now, and the doctors say that he has experienced an absolute miracle. We have become partners with Andrew and have seen fruit on the left, right, and centre as we experience more freedom in serving God.”

I saw Benjamin. I held him as his parents gave this testimony. He was perfect in every way. Thank You, Jesus! I wasn’t there physically when this happened, but God had sent His Word through my television broadcasts and teaching materials ahead of time. Little Benjamin is alive and well today because his parents heard the truth of God’s Word and believed.

That is just one of the tremendous testimonies we heard in Africa on my last visit. My cameraman put over a dozen testimonies on a disk for me to watch. I was really touched. I knew right then that I needed to get these testimonies out to my partners. These are real faith builders, and I especially want you to see what your partnership is accomplishing in the lives of people all around the world.

These testimonies all underscore the importance of what this ministry is all about. I am not trying to draw people to myself or build my kingdom. I know what the strength of my ministry is. It’s not my personality; it’s the message. The nearly-too-good-to-be-true Gospel is powerful, and it will produce supernatural results when received and believed.

I believe this is why the Lord led me to start Charis Bible College fifteen years ago. We are now training up thousands of men and women in thirteen schools around the world, and they are doing greater works than we have done. Indeed, Jesus told us we would do the same and greater works than He did if we would just believe (John 14:12).

In January of 2010, we will be opening up two new CBC schools: one in Kampala, Uganda, and the other in Heidelberg, South Africa. We just opened a new school in Chennai, India, last August, and there will be one opening in Hungary soon.

We are also working on an online Charis Bible College, and the Lord has directed me to expand our college to include a third-year program specifically designed to give our students the tools they need to go straight from Bible college into leadership positions in the church.

At a time when many Christian organizations are cutting back in fear of the economy, we are expanding more than ever before. The Lord has just blessed us with a beautiful, new piece of property that we will be developing into a ministry campus to reach farther with the Gospel Truth than ever before. We are bursting at the seams. We’ll share more about that later.

Our college in Colorado Springs has increased nearly 50 percent over last year. Even though we lost one of our networks in April, which produced 10 percent of our calls, the call volume in our Phone Center has increased by nearly 10 percent. People are calling and receiving like never before. During a time of “recession,” our ministry has grown.

It’s our time. The darker this world gets, the brighter our light shines. I’m convinced the Lord is ready to move through us in an even greater way.

I believe it is very important for you to hear these testimonies. I asked my staff to edit a dozen of them and put them in DVD format. Two of the stories involve children who were raised from the dead, one is a miraculous recovery from a heart attack, and all of them focuses on the life-changing power of God’s Word.

This new DVD, called Changed Lives, Africa 2009, is a must to watch. It shows how important it is to teach the Gospel truth and send this message of God’s unconditional love and grace around the world. Order one for you, your family, and your friends. I believe this will affect you in a powerful way, just as it has me.

The lives that are being changed in Africa and in other places like India, Russia, and Hungary are the result of what we are doing through AWM World Outreach. That is the ministry arm that we use to support these schools and the missionaries that have graduated from CBC and launched extension schools.

This is a separate arm of AWM, and we only mail updates to those who specifically sign up to receive World Outreach information. You will be helping to change lives around the world. You can become a regular monthly partner through the website or by calling our Helpline.

The hand of the Lord is moving mightily in this ministry. Thank you for being a part of it. Without you, we could not accomplish what the Lord is leading us to do. 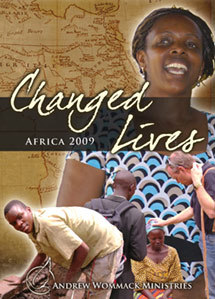 In this video, you will hear the true stories of ordinary people who experienced a miracle through the power of God’s Word. They come from diverse backgrounds and cultures, but all have one thing in common: They needed a miracle from God.