A Call to Prayer

I think all Christians would agree that we should be praying for our nation during this critical time in our history. Judicial activists are no longer interpreting the law but attempting to legislate from the bench. By using these activist judges in our courts, the ungodly are systematically attempting to remove all reference to and influence of God in our society. It’s even become politically correct to discriminate against Christians. Christianity is also the only religious influence that can be prohibited by law. We need the intervention of God to turn this situation around.

Prayer is a powerful weapon. But, there is a right and a wrong way to pray. Just like any powerful weapon, without the proper instruction, it may be useless or someone could get hurt. Wrong prayer is not only ineffective, it can also release the power of the devil. I’ve experienced this firsthand.

In the beginning of my walk with the Lord, I listened to a teaching which used an example of a teenager who felt very ineffective in witnessing for the Lord. This young man prayed and asked the Lord to do whatever it would take to use him as an effective witness in his high school. He specifically asked God to give him cancer and take his life if that was the only way he could show others the power of God in his life. The next day he came down with leukaemia. At his funeral, four of his classmates accepted the Lord because of the way he had dealt with his terminal illness.

At that time, I didn’t know that God had redeemed us from sickness. I had been taught that in God’s sovereignty, He controlled everything that happened to us. So, I bought into this teaching “hook, line, and sinker.” I then gave this tape to a close friend of ours. She also accepted it as truth to the point that she prayed this same prayer. The next morning, she was rushed to the hospital and diagnosed with leukaemia. At her funeral, four people accepted the Lord also.

Since then, I have learned the truth. God did not answer those prayers by giving two teenagers leukaemia. Certainly, God received a measure of glory when those eight people accepted the Lord, but God doesn’t kill one of His children so that others can be saved. Satan is the killer; it was Satan who took advantage of the open doors these wrong prayers created. That’s why it’s important to know how to pray.

On this National Day of Prayer, millions of Christians will be praying for God to move in our nation. Typically, they will be pleading with an angry God to turn from His impending judgment and have mercy. That’s wrong praying. And as I’ve testified, wrong praying can open the door to wrong results.

There is a right way to pray for our nation. But first, we need to recognise that God isn’t angry any more. The war between God and man is over. That’s what the angels proclaimed at the birth of Jesus. Luke 2:14 says,

“Glory to God in the highest, and on earth peace, good will toward men.”

These angels weren’t saying that from then on, peace would reign on earth and wars between people would cease. That certainly hasn’t happened. They were proclaiming the end of the war between God and man. Jesus paid a price that is infinitely greater than the sins of the whole human race. God loves the world, not only the church, but the whole world. He’s already paid for their sins as the Scriptures say in 1 John 2:2,

“And he is the propitiation for our sins: and not for ours only, but also for the sins of the whole world.”

Through His mercy, we avoid getting the bad things we deserve, and through His grace, we receive the good things we don’t deserve. The nearly-too-good-to-be-true news of the Gospel is that we don’t get what we deserve, we get what we believe. Jesus has made all that God is and has, available to us, and it is through faith that we access that grace (Rom. 5:2).

So, the typical Christian is making intercession to an angry God, asking Him to turn from His fierce wrath, but that’s the wrong way to pray. I can just hear someone say, “But that’s exactly what people did in the Old Testament!” That’s true, but there is a major difference between the Old and New Covenant. That difference is Jesus. Jesus has forever changed the way we approach God and how we appropriate His favour.

“Turn from thy fierce wrath, and repent of this evil against thy people.”

It’s amazing that a mere human being had the audacity to speak to God this way! What’s even more amazing is that God allowed Moses to speak to Him this way and actually repented (Ex. 32:14). This example will be held up all across this land as the standard we are supposed to emulate.

However, this is not the way that we, as New Testament believers, should approach God. Galatians 3:19 refers to Moses as a mediator. The dictionary defines a mediator as “someone who seeks to resolve differences between two or more conflicting parties.” It was appropriate for Moses to act as a mediator because Jesus had not yet come, and the atonement for man’s sins had not yet been made. God and man were not reconciled.

But now, because of Jesus, God has been reconciled to man. All that is left is for man is to be reconciled to God, and that should be our message (2 Cor. 5:19-20). To approach God as an adversary who is ready to destroy us is to approach God without Jesus. It doesn’t honour the mediation that Jesus purchased. First Timothy 2:5 says,

“For there is one God, and one mediator between God and men, the man Christ Jesus.”

When Jesus became our Mediator, He put all other mediators out of business. In the days of Moses, it was appropriate and necessary for him to act as a mediator and intercede for his nation, pleading with God to turn from his wrath. Why, because Jesus had not yet come and taken His place as the only Mediator. Now that Jesus has come and has paid for the sins of the whole world, it is wrong to continue to pray the way Moses did. It’s against everything Christ accomplished. In other words, it is anti-Christ. I know those words are strong, but they are the truth.

How then should a New Testament believer intercede for their nation? Start by praising God for what He has already accomplished through Jesus. Then take your place in what Christ has already done, and use your authority as a believer to speak God’s blessing over your nation instead of the curses that Christians so often pronounce. It’s really that simple. There is tremendous authority given to us if we will use it, and there is awesome power in our blessing.

That doesn’t mean that America is safe from the consequences of continuing on its current path. God won’t judge America; He has already judged Jesus on our behalf. But the farther we walk away from the Lord, the farther we get away from His protection. God won’t force Himself or His blessings on us. We have to pursue them and obtain them through faith. Without a change in the hearts of the people and a change in the direction we are headed, we will forsake our own mercies (Jon. 2:8) and reap death instead of life (Rom. 6:16).

Jamie and I encourage you to be a New Testament intercessor on this National Day of Prayer. Honour Jesus by approaching a loving God who has already made every provision for the revival of this nation so desperately needs. Speak words of faith that release the goodness Jesus has so graciously provided. And then, do your part in sharing this good news with your friends and neighbours.

In this article, I’ve only touched on the subject of prayer and intercession. I have a five-part series entitled A Better Way to Pray that will answer many of your questions concerning prayer. I believe it will revolutionise your prayer life and help you avoid many of the mistakes that I have made. 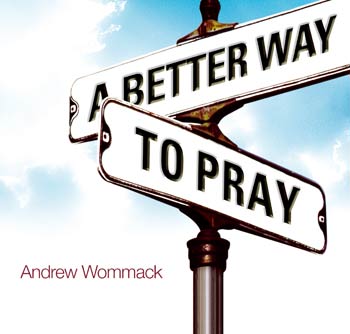 A Better Way to Pray

It may surprise you to find that one of the big reasons believers struggle with prayer is because of all the wrong teaching they’ve received about it.